Online Book Discussion: We Share the Same Sky: A Memoir of Memory & Migration by Rachael Cerrotti 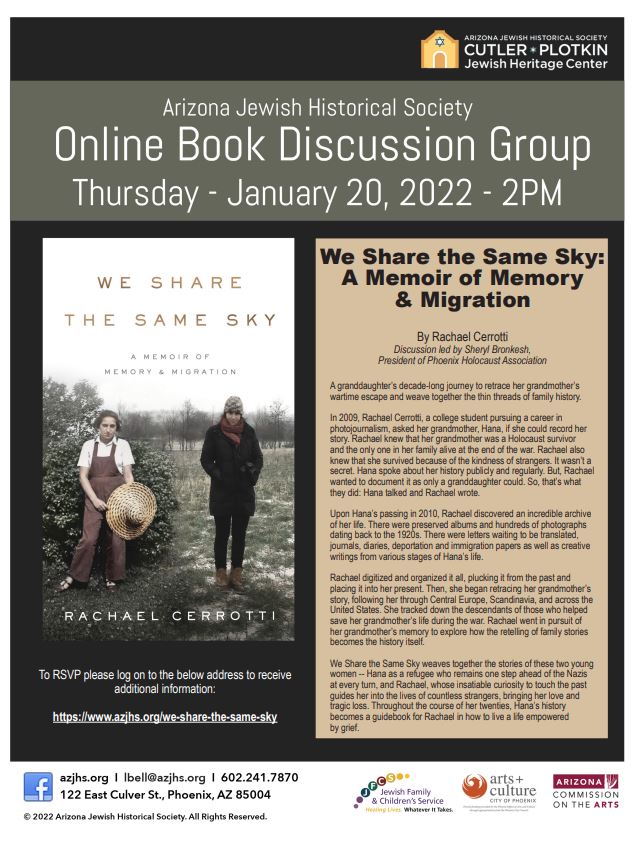 We Share the Same Sky: A Memoir of Memory & Migration
by Rachael Cerrotti
Discussion led by Sheryl Bronkesh, President of Phoenix Holocaust Association

A granddaughter’s decade-long journey to retrace her grandmother’s wartime escape and weave together the thin threads of family history.

In 2009, Rachael Cerrotti, a college student pursuing a career in photojournalism, asked her grandmother, Hana, if she could record her story. Rachael knew that her grandmother was a Holocaust survivor and the only one in her family alive at the end of the war. Rachael also knew that she survived because of the kindness of strangers. It wasn’t a secret. Hana spoke about her history publicly and regularly. But, Rachael wanted to document it as only a granddaughter could. So, that’s what they did: Hana talked and Rachael wrote

Upon Hana’s passing in 2010, Rachael discovered an incredible archive of her life. There were preserved albums and hundreds of photographs dating back to the 1920s. There were letters waiting to be translated, journals, diaries, deportation and immigration papers as well as creative writings from various stages of Hana’s life.

Rachael digitized and organized it all, plucking it from the past and placing it into her present. Then, she began retracing her grandmother’s story, following her through Central Europe, Scandinavia, and across the United States. She tracked down the descendants of those who helped save her grandmother’s life during the war. Rachael went in pursuit of her grandmother’s memory to explore how the retelling of family stories becomes the history itself.

We Share the Same Sky weaves together the stories of these two young women — Hana as a refugee who remains one step ahead of the Nazis at every turn, and Rachael, whose insatiable curiosity to touch the past guides her into the lives of countless strangers, bringing her love and tragic loss. Throughout the course of her twenties, Hana’s history becomes a guidebook for Rachael in how to live a life empowered by grief.